"Reflection" by Christopher Florin, used by kind permission of the author

There were two main types of original hubcaps for the VW T2 bus: 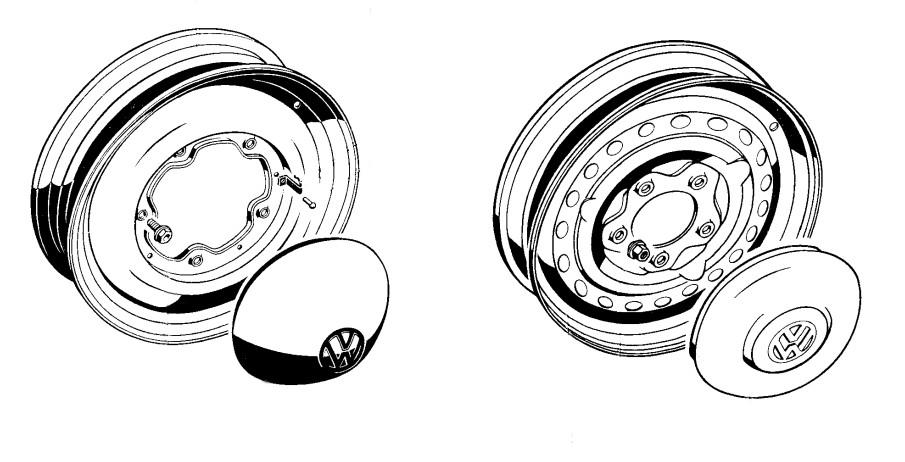 Flat hubcaps were available in two variants: while the initial parts appeared to have a thinner outer edge, the introduction of the T3 (Vanagon or T25, '79 onwards) brought an additional type with a higher (fatter) outer edge. Either of the two types will fit the T2b, but the fat flat hubcaps are nowadays the only original parts still available from VW.

Hubcaps were either chromed or painted: in the early years the non-deluxe buses were fitted with spray-painted hubcaps. These were mainly for German vehicles, the export models were soon after delivered with chromed hubcaps.

You can skip the rest

If you are not interested in the facts and a bit of history, you can skip the next sections. In summary, assuming your bus has got stock rims (check them out and compare them with the first picture), it all boils down to the question:

The hubcaps for the Early Bay (T2a, from '68-'70), which match rims with the Wide 5 factory bolt pattern (aka 5x205, 5 bolts distributed along a 205 mm circumference) and the drum brakes at the front. They are fitted via clips attached to the rims and are also known as baby moon hubcaps (as opposed to full moon caps, which cover the entire wheel instead of just the center).

The hubcaps for the Late Bay (T2b, from '71-'79), fitted to the rims with the Narrow 5 factory bolt pattern (aka 5x112, 5 bolts distributed along a 112 mm circumference) and the disc brakes at the front. They are held by pressure on the 3 bulges in a triangular arrangement along the inner ring that contains the lugs that hold the wheel.

With the introduction of the T3 in 1979 the flat hubcaps were slightly redesigned to give them a higher outer edge. Some experts say these hubcaps were introduced earlier than '79, but there seem to be no sources to confirm that.